In 1969, Led Zeppelin would hit the road along with Liverpool Scene and Blodwyn Pig on a British tour promoting their newly released self titled "Led Zeppelin I" album. Little did they know, they wouldn't need much promotion given the material spoke for itself proving a setlist with hits like "Communication Breakdown:, "Dazed and Confused" & more. Offered here is an original 12" x 18" 1969 Led Zeppelin Summer Tour concert poster signed in bold black felt tip marker by Jimmy Page adding the date. It's worth noting this is the first original signed concert poster we have handled signed by any members of the elusive Led Zeppelin bunch. Overall in fine condition, rolling, with minor color loss due to storage. Authenticated by JSA with a full letter of authenticity. 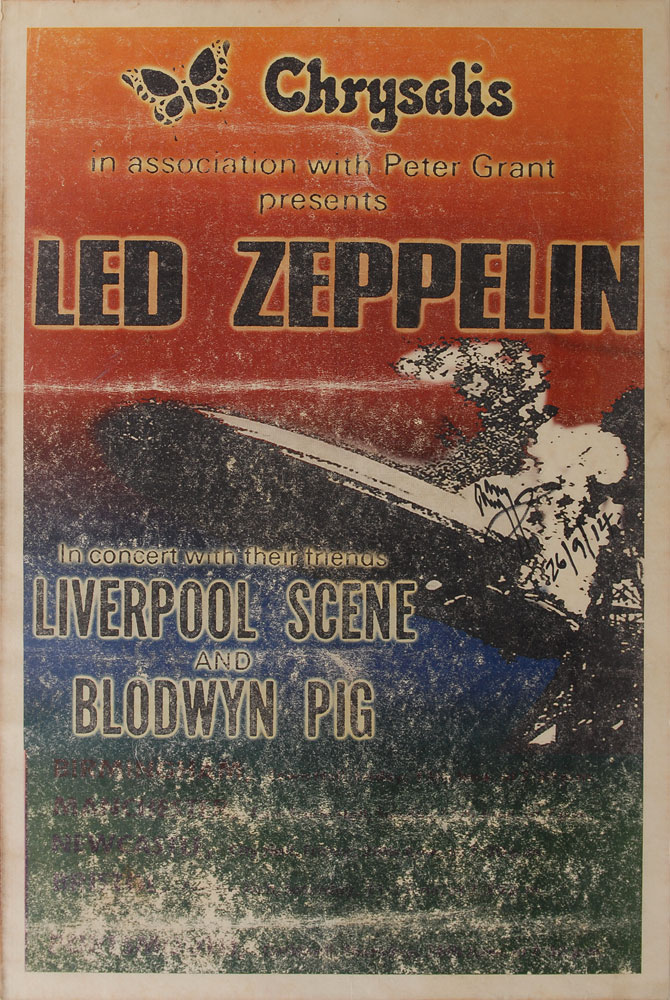 Posted by autographsforsale at 00:32 No comments:

autographsforsale
We have a large online collection of Authentic Autographs. Each item comes with our Lifetime Money back Guarantee. We are also proud members of the UACC and IADA/CC. We have one of the largest collections of memorabilia online in our store. Our Collections include Music autographs, Movies, Sports and many more plus a new section of Celebrity Owned Memorabilia. All our autograph's have been Certified as Authentic and is Guaranteed as such. We have been in the business over 15 years and proud to offer the best Authentic items to our customers worldwide. We are UK based Autograph Dealers with clients worldwide. We currently hold a very large collection of Movie and Sport memorabilia but our main speciality is Music memorabilia from artists such as The Beatles signatures, Jimi Hendrix to Led Zeppelin and many more.